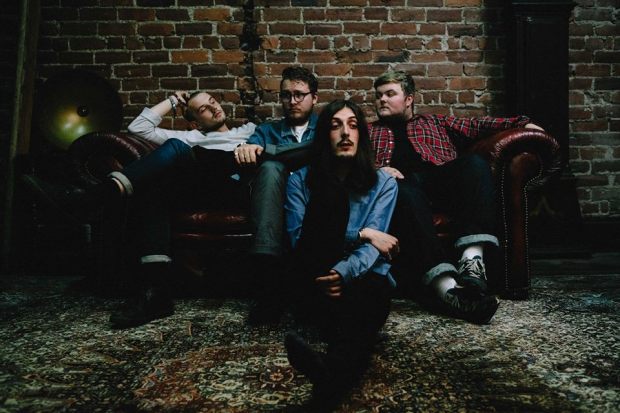 Fresh from a busy summer headlining Evolution Emerging and supporting Primal Scream, Newcastle alt-rockers A Festival, A Parade have announced the forthcoming release of their brand new single ‘If Dogs Could Talk…’

Their sound evokes comparisons to the likes of Frightened Rabbit and The National, and the four-piece made up of Joe Allan (vocals, guitar), Reece Spencer (lead guitar), Ollie Winn (bass) and Liam Tellum (drums) have been championed by many in the North East, and listening to this song it’s pretty easy to see why.

The single is released on 19th September and will be available to purchase on iTunes and Spotify.

If you’d like to catch them live (which I strongly suggest you do!) you can catch them on the following dates:

⁣ Things that I am today: feeling sorry for myself.⁣ ⁣ I fell on my way into work this morning and now I’ve got a lovely grazed/bruised knee and leg, an aching back and hip and two very sore hands, wrists and arms 😳 sobbed in the office then to top things off, my computer didn’t work for an hour! ⁣ ⁣ Adam ran a bath for me coming in from work, I’m chilling now and trying to ease my aches and pains whilst listening to @lanadelrey 🛁⁣ ⁣ Gonna put my jarmies on after this, eat chocolate and chill for the whole night because I feel like I deffo deserve it 🧖🏻‍♀️✨
⁣ How perfect is this weather today? 🌞⁣ ⁣ Had a lush walk with Adam and now we’re back home chilling - Dads got the BBQ on, Mam is prepping food, we’re listening to Radio 2 (in love with Niall Horan’s new song) and then I’m doing a little quiz later for the fam too 😄⁣ ⁣ Perfect start to the week - happy bank holiday! 🥳
An absolutely lush day celebrating Dads birthday with a wonderful afternoon tea made by Mama Burgess 🍰 though let it be known I contributed with cheese and chorizo scones...and brownies but they didn’t make the table (see IGTV for details) 👀😂⁣ ⁣ Definitely in a food coma now but still managing to snack and drink Prosecco! No work tomorrow so it would be rude not to 😏🥂
Happy Birthday to the best Dad a gal could ask for- @paul_burgess 🥳❤️
‘I carried a watermelon’ 🍉⁣ ⁣ I love this Dirty Dancing top that I got from @pimkie last year - I also love my new @cosmic_crystals_official necklace too ✨⁣ ⁣ Totally sick of the wind these past couple days, it’s playing havoc with my sinuses so I can’t even really get out for a walk 🙄 I’m hoping it gets nicer though so we can have a BBQ on Monday. Fingers crossed!🤞🏼🍔
If you need a giggle then scroll no further...👀⁣ ⁣ This will never not make me laugh- 9 years ago I went to a Disney themed fancy dress party and, me being me, decided to ditch the idea of dressing as a princess...because I wanted to be Troy Bolton 😂 ⁣ ⁣ Zefron eat ya heart out. ⁣ ⁣ GETCHA HEAD IN THE GAME! 🏀