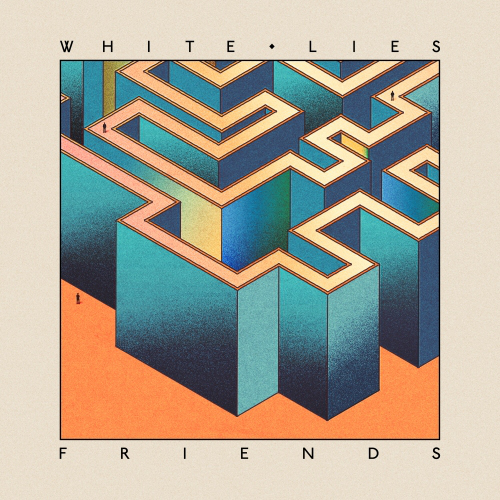 White Lies are a band that, in my eyes, can do no wrong. I’ve loved everything that they’ve released since I first heard their debut album ‘To Lose My Life…’ in 2009, and they’ve always been a band that have excited me. Their latest, self produced album, ‘Friends’, is no exception. I could probably say everything I want about this album in two words, those words being ‘it’s genius’, but I’m not going to do that.

‘Friends’ certainly seems poppier than their last three albums, and there’s a real nod to the 80’s with regards to sound and energy. It doesn’t take long though, to see that their classic darker-edged, melancholic lyricism is still intact with lines like ‘I took the life and soul from every dream, until it sucked the life and soul from me’ from ‘Swing’, a personal favourite of mine.

The album is full of infectious hooks and explosive, anthemic choruses, specifically with tracks like opener ‘Take It Out On Me’, and ‘Hold Back Your Love’. On a whole, it’s a wildly energetic album that will have you grabbing your hairbrush and singing along passionately- seriously, I know I won’t be the only one!

The album drops tempo with ‘Don’t Fall’ which finishes the album perfectly. Harry’s crooning of the ballad is up there as one of my favourite vocal performances of his, ever.

The album has evoked a different mix of emotions with every listen for me. I’ve found myself smiling, crying and also feeling nostalgic over things and I’m not even sure why, but that’s the power of White Lies for you.

I’ve had ‘Friends’ on repeat since I bought the record, and I can’t see that stopping any time soon. The band are currently on tour and hitting up the UK next month. I’m heading to the Manchester show, and I’m extremely excited. So congratulations on another phenomenal album fellas, it was certainly worth the wait!